I can’t believe my time with Chicago is coming to an end. Saturday the 10th of November will be my final show.

Where do I start. Well I guess at the beginning of this journey which was a few years back on a trip in NYC. I went to see Chicago on Broadway with my fiancé Josh, Brandy was playing the part of Roxie Hart and she absolutely blew me away. During the interval I turned to Josh and said “one day I am going to play that role” he looked in my direction with a ‘you haven’t even started your first acting role yet…’ look. To be fair it was a little bit overconfident of me as he was right, I was only at the beginning of my theatre career but I had fallen in love with the show. A couple of years later it got brought up in conversation again after whispers that they were looking to find a new Roxie Hart for the West End production. At that particular point in time and due to other commitments already in place it wasn’t possible for me to go for it.

Then a few years later in a meeting about something completely separate, Chicago was brought up again. I expressed my interest and shortly after an email came through inviting me and my team to watch the show. I loved it just as much as I had remembered. The offer followed and the rest is history! The following week I was in the theatre for a costume fitting.

It all happened very quickly. Rehearsals started the following week, leaving me with just three weeks of rehearsals to learn the script and character and before I knew it, it was opening night! Stacey Haynes was a massive part of my character building and really helped to get me in shape for the show. 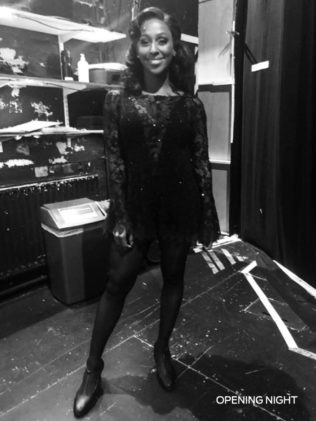 Roxie Hart as a character is sexy, sassy and will do anything to remain the centre of attention, all she really wants is to be famous and she is prepared to do pretty much anything to get there!

Roxie is very different to my previous roles. I have learnt so much from the show and I’m excited and grateful to be able to apply the methods I’ve learnt to my future roles.

Chicago is the 4th show I’ve been in – I can’t believe it! And I’m about to go back on tour with the Bodyguard, which since the last time I was in it I have had so many experiences that this time around I think I will be an entirely different Rachel Marron… boy I am excited! At the moment I am rehearsing during the day as Rachel Marron and then performing in the evening as Roxie so it is full on but I have had the best time and I really don’t want it to end.

I have got to work alongside so many amazing actors and actresses during this run. There’s been two Billy Flynn’s, first Martin Kemp and now Duncan James, I have built amazing friendships with both of them. Not to mention my ladies; Mazz Murray who plays Mama Morton and Josefina Gabrielle who plays Velma Kelly. It really has been a dream come true to work with each and everyone of the cast, crew and company of Chicago, which in my opinion is one of the best in the West End.

This experience has reinstated to me a saying that I live by which is ‘What’s meant for you, wont pass you by’ and I am so grateful that this opportunity came back around.

To everyone that came and saw the show I hope you loved it as much as I do, thank you. And to those who haven’t seen it yet… you MUST!